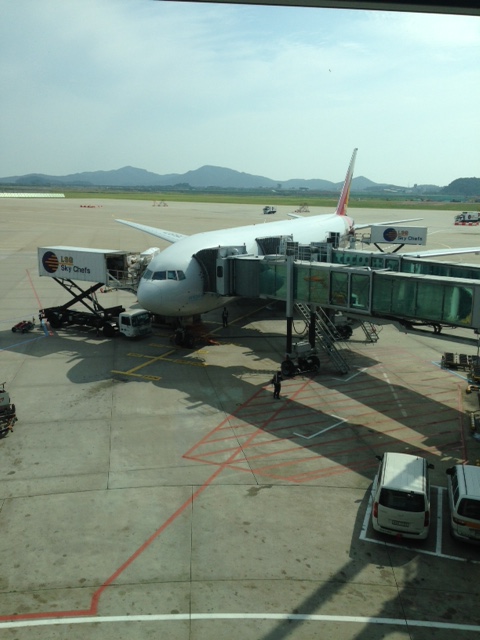 We made it home last night. It was one long day! We went for a run in the morning since we knew we were going to be sitting a good portion of the day. Then we got the last few things packed up and headed to Seoul Station which is the hub of the subways.

At Seoul Station we were able to check our bags and get our immigration stamp and buy express train tickets. Little did we know at the time that this allowed us to bypass all of the security lines and go through special security and check in at the airport. Our train tickets were for 2PM and it was only a little after 11 after getting everything checked and stamped. So we headed out and walked down to the Namdaemun market which was fairly close. We bought some dumplings and pineapple on a stick (two of our favorite things in Seoul) and headed to the old City Gate where we ate lunch on the first day, we thought it fitting to eat our last lunch there again. We made our way back to Seoul station and wandered through a big department store that was connected to the station and then made our way to our 2PM train.

The train was really nice and the seats were comfy. We got to see al little of the countryside around Seoul during the 44 min ride to the airport. We got off the train and then discovered we got the fast track for security and check in (especially since our bags were already checked and we had our tickets). We found our gate and hung out for a bit. Well actually Clint hung out and I walked the hallways some because I wasn’t ready to be still for so long yet.

Before long we were loaded on the plane and pushing away from the gate. I got a little choked up thinking about having to leave Edric there. I know its just a few short weeks until we go back, but it makes it hard knowing he’s still there. I just kept telling myself that next time I’m in that place I will be entertaining a 2 year old for the entire flight home (hope he sleeps a little). Speaking of sleep, both Clint and I were tired but it is hard to sleep on a plane. Harder still when there is an elderly gentleman who decides that it is a good time to sing opera. He didn’t sing real loud, but loud enough for the 3 or 4 rows around him to hear. We were in the row right behind him. And he sang for about 5 hours. And then we also had a screaming baby that kind of took over the second half of the flight. Somehow we both squeezed out a couple hours of non restless sleep.

We got to San Fransisco and made it through customs and all of that and got our bags rechecked and found some lunch to eat. We then found a friend who was traveling home with her new little boy. She took custody on Tuesday. He was doing well, he actually fell asleep in her arms while we were standing there talking with her waiting for her flight to take off. It was neat to get a little glimpse  of the finish line.

Before long it was time to head to Denver. We both got on the plane and settled in our seats and before we even took off were both sound asleep, I think the roaring engines just lulled us to sleep. We woke up somewhere over Utah. It was so good to see Caedmon and Leighton and give them both hugs. We came home and everyone went to bed.

And so now we are in a big pause as we wait for the approvals to come through. Hoping that we are back on a plane by mid to late September and bring the little guy home. Luckily between school starting, work, our garden and various activities our minds will be kept some what occupied in the weeks to come while we wait.