So it’s February. And I have daffodils coming up. In February. Something is so wrong with this picture. 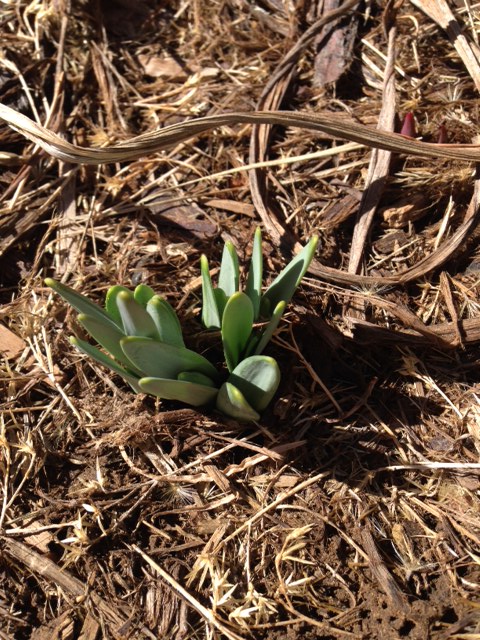 Don’t get me wrong, I love spring time. REALLY love spring time. But I kind of think that spring should happen in spring. NOT in February. Because I figure that if it is trying to be spring now…that means when it is really suppose to be spring, we will have snow and cold and I will be bummed.

I’ll be honest, I’m not a big fan of winter. Cold weather just isn’t my thing. I like sunshine and being outside and not having to put on 800 layers of clothes (on myself and on the little people that live in my house). But I’m ok with winter because I know that spring is coming. Spring just makes everything better. I just smile at the thought of tulips popping up and blooming and trees starting to bloom and everything coming alive again. So I put up with winter every year, with the understanding that spring is coming.

So the problem is is that if it starts pretending to be spring now (sunny days, temps in the 50s-60s, flowers starting to emerge), winter will remember that he forgot to show up and will decide to come late to the party and snow all through the end of March and April and into May. And if winter is super cocky will decide to snow into June as well which is just rude.

And then what happens to spring? It’s ruined. The flowers don’t bloom because the snow is so heavy it breaks them off. Or the frost freezes the buds on the trees and they don’t bloom. And the sun doesn’t shine, when I should be digging my hands into the soil and getting my garden ready, I end up shoveling snow.

Granted I have to be careful about my complaining about the spring weather we have because the East coast is buried in feet of snow. I think even those that love winter are probably a little sick of the winter that they have been having. So I shouldn’t really complain.

And I won’t. As long as winter doesn’t decide to ruin my spring. Just saying.