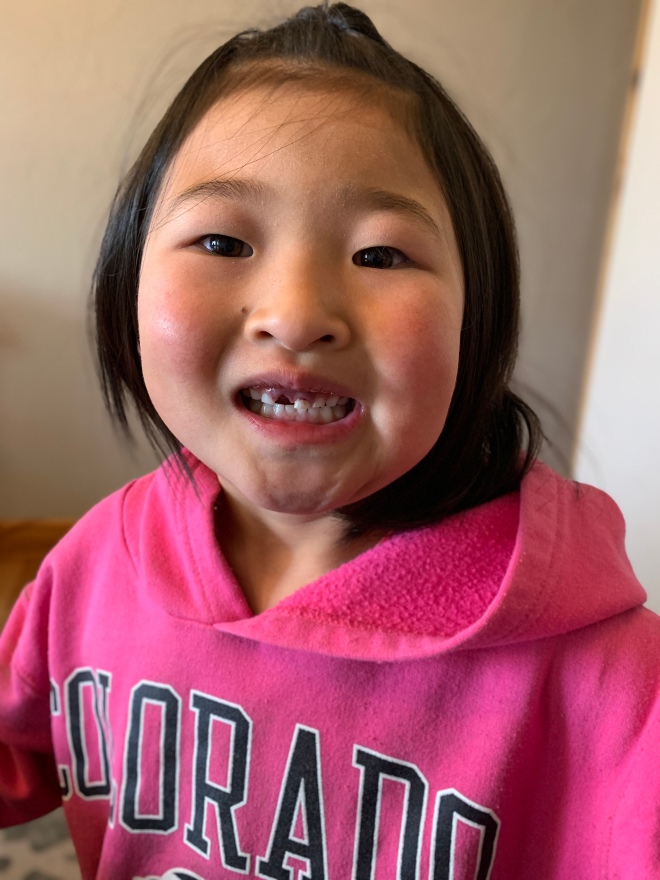 Going to take a little break from our trip blog to celebrate Coppelia’s Family Day. Coppelia’s Family Day was on Wednesday April 21st, we celebrated her being home and in our family for 4 years. Everyone had a bit of a cold so it was a low key day but we had Mochi Ice Cream balls for dessert after dinner which everyone loves. The other exciting news for Coppelia is that she lost her first tooth! It wasn’t suppose to come out, but the kids were playing knights and dragons. Coppelia was dressed as a princess and she and Edric, who was the dragon, decided to “joust”, Caedmon and Paxton who were dressed up as knights were the cheering crowd for the jousting contest. I asked them to show me how they were “jousting” afterwards, and it turns out they were holding pillows on their chests and running full speed at each other and running into each other. As expected that didn’t go all that well and Coppelia’s mouth found Edric’s head and she knocked her front two teeth loose. It was really hard not to laugh once I got everyone settled down. Not has a huge surprise one of the teeth fell out a couple of days later and she was so proud of loosing her first tooth. Our good friend Sarah has two daughters and one of them believes that her mom is the tooth fairy for all kids everywhere and has told my kids that so they also believe that Miss Sarah is the tooth fairy, so at church Sunday night she got lots of questions about being the tooth fairy and if she was going to visit Coppelia that night. Luckily the tooth fairy did visit Coppelia and she got 2 half dollars under her pillow. Crazy to think we only have 1 more “first tooth lost” left, hopefully Paxton’s first tooth comes out on it’s own and not with added help. Coppelia you are going to keep us on our toes (and knees) and bring excitement and punk into our lives in ways that we didn’t know we needed. Glad to have you as part of our family.