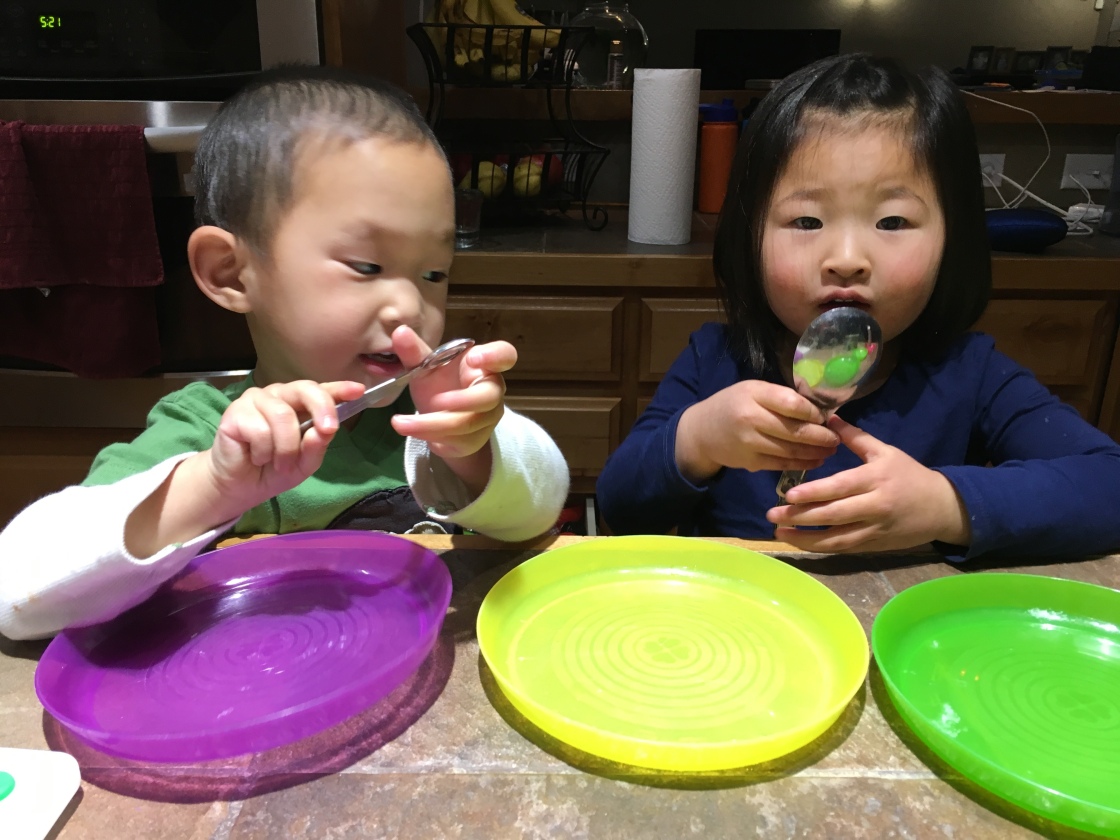 Yeah I think that may be what I start calling the two littles. I’ve teased about it before but really it seems more and more fitting. Which one is Double and which one is Trouble? Really you can’t have one without the other, they are like a super hero team that is joined together. We watched the Incredibles last weekend as a family for the first time and afterwards the kids were talking about what super powers they would all have. I decided for Paxton and Coppélia they would just be a team superhero, Double-Trouble. Apart they don’t really know what to do without the other. A couple of weeks ago Paxton was sick so Coppélia went to preschool by herself and their teacher said she just kind of wandered around not knowing what to do. And in their dance class last week, Coppélia had a sore on her hand (how that affected her feet I still don’t know) but Paxton was also unable to dance because of her owie.

We often get asked if they are twins. That usually leads to a long explanation that no they aren’t and they are 10 weeks apart in age and both adopted. People will often still ask if they are biological siblings after I explained about them being 10 weeks apart in age….come on people, biology doesn’t work that way and really its not anyone’s business if people are biologically related or not….but that’s a whole other can of worms. But I’ve recently decided I’m going to change my answer to this question that we get all the time. I’m just going to start answering “no, they are just partners in crime”. Because that’s the absolute truth. Last Friday night it was our weekly mommy pancake night while Clint was at rehearsal and I walked out of the bathroom (where I had only been for a short amount of time) and I immediately saw two stools pushed up to the kitchen island and the bag of chocolate chips (for the pancakes) sitting right on the edge of the counter top. And I heard two giggling 3 year olds in the cupboard. First off I was quite impressed because it meant that they had run upstairs to get the other stool because we only have one down stairs normally, and had figured out that the chocolate chips were even on the counter, and then promptly helped themselves. And if I had any doubts that they had been in the chocolate chips the evidence was all over Coppélia’s face. Paxton is a careful eater and had it just been him I might have wondered but Coppélia made the suspected confirmed. And being 3 they had no shame or even thought of hiding their crime….when I asked, they boldly told me in their 3 year old voices “I eat lot chocolate chip mommy”. Yes, yes you did. Hoping that they don’t loose that sense of honesty anytime soon because I’m going to need it with the two of them and their antics.

They crack me up all the time and definitely keep me on my toes. I can’t imagine our family without one or the other of them and I am so blessed that I get to be their mommy….despite their super powers.