This Fall on Friday evenings it is just me running the show. That hasn’t really happened in as long as we can remember on a regular consistent basis. From time to time Clint has a meeting or something but not something that he’s had every week for an extended amount of time. As it turns out Caedmon’s dance company needed more adult males for the party scene in the Nutcracker and Clint volunteered to help, so he’s officially a “Party Dad”. Which means every Friday evening he has rehearsals for a few hours to learn how to party on stage. And it means that mommy is in charge which is kind of fun.

And so early on I decided we would make Friday nights fun and have pancakes every week. Everyone likes them, they are easy to make, and there is no whining about what we have for dinner. I was starting to cook them last night and Caedmon called down from the playroom to ask what was for dinner and I told him and as he shut the door I heard him exclaim “YES!”. Score 1 for mommy.

Sometimes we make a fort in the living room and eat our pancakes in there. Because you know it’s Friday and nice to change things up a little. I’ve also decided to make it a game night. Trying to find a game that all 5 can play has been a little interesting, but we are figuring things out. Lately I’ve been having them take their baths/showers after dinner while I clean up the kitchen and then its game time in pjs which always makes it more fun. Last night we did Monopoly Jr. I combined Paxton and Coppelia into a team together and I served as the banker for everyone. Paxton and Coppelia were far more interested in playing with the plastic ticket booths that come in the game and so they didn’t last very long and slowly wondered over and played with the nearby train set which was just fine. All in all, once a certain 9 year old got over not winning, we had a great time. 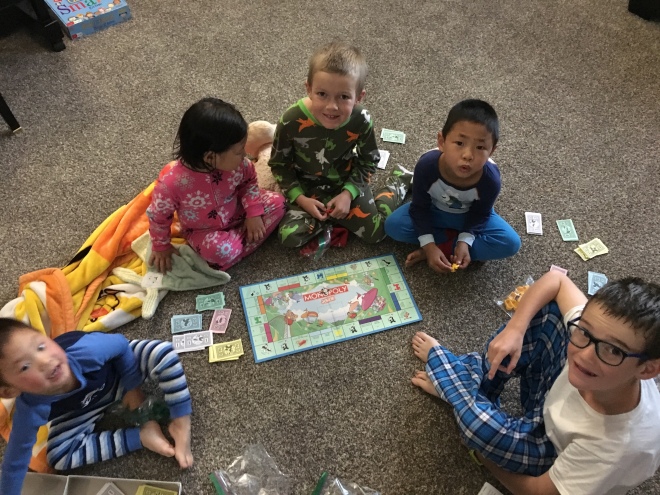 I look forward to Friday evenings each week and just the sweet time I get to spend with the kids relaxing a little, playing, eating pancakes and just having a low key night. 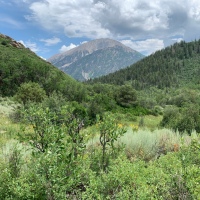