On April 21, 2017 we became a family of 7! Coppelia Jiyun did great on the plane rides home, she slept almost all of both flights which made it very easy. Unfortunately she and I got stuck in customs in Seattle for over 2 hours and it was only because I kept asking every officer that walked by for help that we finally got pulled out of the line and processed, which was good because we had a 2 hour and 15 minute layover….so by the time we got processed, we threw our bags at the re-check people, mom and I got back through security and we ran at full sprint to our gate, we made it with 3 minutes to spare….but that’s only because the flight was 15 minutes delayed because they couldn’t get the ticket reader to scan the tickets correctly at the gate. We needed that delay!

Before we hopped on the plane Friday evening in Seoul, mom and I spent the morning going to Lotte World Tower in the south east part of seoul. It turns out to the be the 5th tallest tower in the world and has the fastest elevator in the world. We rode up 120 floors in less than a minute. We could see a lot out the top, even though it was the typical haziness that goes with being in Seoul. There was also two spots on the 119th floor that had glass bottoms that you could look down to the street level 119 floors below which was way cool. Coppelia was still pretty reserved and only happy in the carrier.


We were greeted at the airport by the four big brothers, Clint, my dad and brother and his girlfriend Heidi, our life group, my friend Bekah, our two social workers who have played key rolls in getting all three home, and our friend Danielle who took the photos. It was so good to see the boys and Clint and everyone. Coppelia was only happy in my arms and Paxton quickly wanted up in my arms as well, I’m going to get some pretty strong arm muscles over the next few months I think.

We headed home and everyone headed to bed. For the first night home everyone actually did pretty well, Paxton had been up a lot for Clint while I was gone, and he was still up a couple times but much less than it had been and for less time as well. Coppelia despite sleeping all day on the flights actually went down real easily. She’s was up for about an hour in the night because of time change I think, but then settled down and went back to sleep. Everyone felt better this morning and we just had a low key relaxed day here at home which I think everyone needed.

Coppelia was still pretty clingy this AM, but she slowly warmed up to the boys and Clint as the day went on, and by this evening while Clint was making dinner th other 6 of us were all sitting in the grass rolling the ball back and forth to each other and giggling. Not bad for a first day home.

And so we start this process of figuring out what life looks like as a family of 7, it’s take a ton of prayers to get to this point and it’s going to be many many more to get through each day and to raise and shepard these 5 blessings along their lives. Overwhelming to think of at times, but so thankful it’s not on our strength or ability to do any of it! 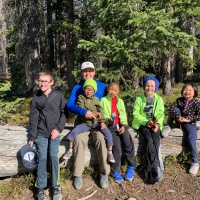