So some people do Elf on the Shelf this time of year. We never had. I kind of think the elf is creeping looking. Instead we have a missing Mary. Yes, Mary has left the stable and is missing in our house. Joseph, the wise men (for some reason we only have 2?), baby Jesus, and the shepherd (again somehow we only have one of these) and a donkey are all actively searching for her. They have spread out around the house. 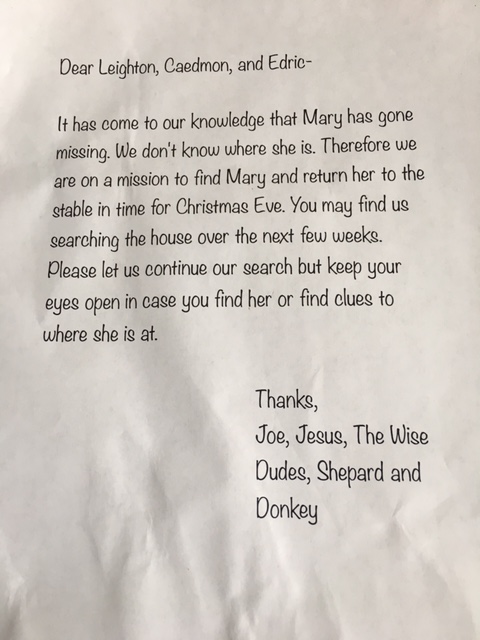 And just in case you think I might be a little crazy (not necessarily wrong), this isn’t actually the first time that a Mary has gone missing. In fact when I was a senior in college there were two nativity Marys missing.

It all started when I was suppose to be studying for my genetics final. And like good Baptist college students my apartment mates and I not only had one nativity set up but we had two. I’m sure we earned bonus Baptist points for both of them. Anyway…I’m not saying I know how it happened but one afternoon when I was busy studying molecular genetics the Marys went missing. And in fact there was even a ransom note taped to the door of our apartment  followed by a second note with a promise to search high and low for her (signed by the two Joes, Jesus and Jesus, Wise Dudes, Animals, and Shep Boys). Oner the next couple of weeks in our apartment one had to be careful because random nativity people would show up everywhere. One could find a donkey and sheep hanging out in the fridge, or a shepherd taking a nap next to a tooth brush. There was one day when the Joe’s where found attempting to fly over the dining table by hanging off the overhead light by string.

The nativity folk moved all over our apartment. The plan was for them to descend on the Marys hiding place just in time for our apartment mate Christmas party/gift exchange. That was the plan. Unfortunately I’m not that good of a Mary hider especially in a small college campus apartment and so when I went to reveal Mary and Mary, they were no longer there. My apartment mates had in fact found them and they wrapped them up and gave them to me for Christmas. In the end everyone was returned to their respective stables.

And so even though its been a few years since those Marys went missing (and I had to take molecular genetics finals) I felt that it was time for Mary to go missing again. I think she likes playing hide and go seek actually. And there are clues left out and around from time to time.

Granted the clues don’t make much sense or help in any sort of way. But I learned my lesson that I can’t give away Mary’s spot too early…. 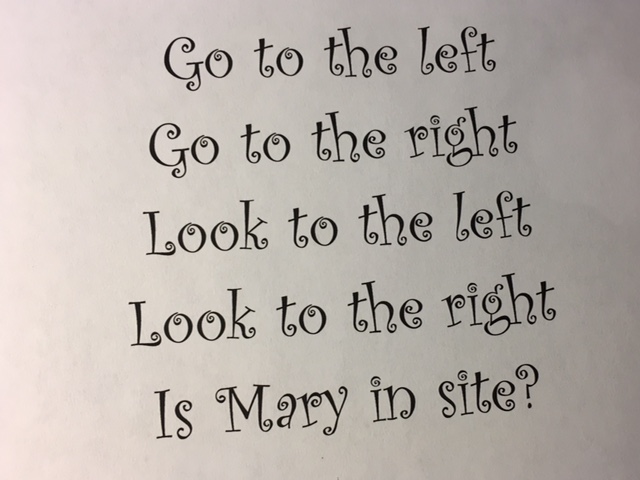 And so over the next few weeks there will be nativity people searching all over our house for her. And three little boys trying to figure it all out.

Don’t worry though. I have a strong feeling Mary will make it back in time for Christmas Eve. 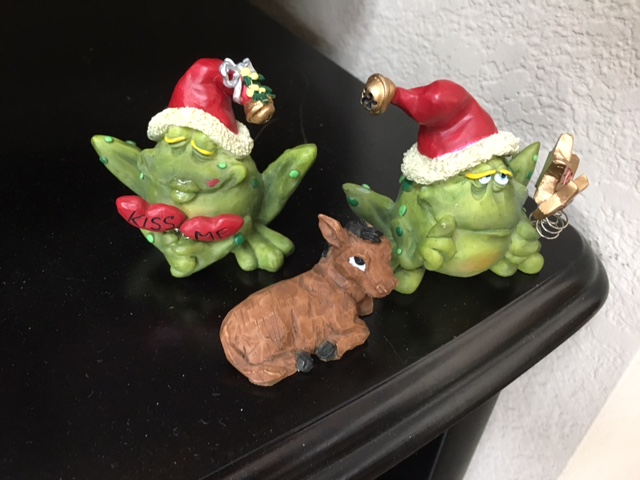