The adventures of our trees. Our first few years of marriage we cut down our own tree. It was fun and romantic (and FREEZING) and I was always amazed at how what looked like a very full and beautiful tree in the forrest somehow looked more like a fat stick with a few branches by the time we got it home. But as newly weds in med school and residency and grad school 10$ for a tree was a bargain we couldn’t pass up. Then we moved and actually got jobs and started getting paid. And we had small young children and hiking through the forrest in -5 degree weather wasn’t so much an option. Luckily there are always tree lots around and so we would find trees. And each year we started finding larger and larger trees. The chore was usually figuring out how to get the tree inside.

And somewhere in that process I kind of became a tree snob. I went from making paper chains and popcorn strings to decorate the tree because that’s all we could afford, to deciding that my tree needed to be decorated a certain way with lights that worked and all in deep brown/blue/dark red/dark green sort of theme. It all had to coordinate and look good. We let the boys take all the other random ornaments that we had accumulated (seriously don’t know how I ended up with a whole slew of neon glittery stars except that they must have been on clearance one year when we were making popcorn chains). And decorate little trees (usually the bottom branches off our tree that we cut off in order to get it through the door) in their rooms.

So this year when we thought we were going to move we packed everything up in a POD for storage and to help make the actual moving easier and part of what I packed were our Christmas ornament/lights/decoration boxes. Because of course we were set to close on our house on December 1st, so we wouldn’t need our Christmas decorations until after we moved in. EXCEPT of course everything fell through because of timing and adoption stuff and God’s plans and all the above. And since it doesn’t make any sense to get our things out of the pod now just to reload it in the spring/summer when we do move (especially since we will have 5 kinds then) we opted to just leave everything packed there and we’ll just make do for the next few months (although I am missing all my photos on the walls).

And so we had to figure out what to do for decorations this year. Clint found a box of ornaments and a few lights in the basement that I forgot to pack, and I made a quick trip to the store to buy a few things to make it all come together. The we had to go get a tree. Last year we took the boys up to the mountains to cut down a tree and got stuck in the snow and ended up buying a tree at the lot anyway, so we just cut to the chase this year and decided we would get a tree at the lot. (I refuse to get a fake tree, I just can’t do it).

We loaded up Friday evening and headed to a local farm, which as it turned out was not selling trees this year. So we drove down the road to turn around and came across another tree lot at a small farm and decided to pull in. We got everyone unloaded (which still takes a bit since Caedmon is still in a cast), and were greeted by the lady running the place. She asked what we wanted and we had already decided that we would go with a smaller tree this year. Clint told her we were looking for a tree between 3-5 feet. She walked over and pulled up two trees that met that description. We looked at them and asked the boys which they liked and they all pointed to one. We re-loaded everyone back into the van and the lady commented “I think it took you longer to unload then it did to actually pick a tree.”

We got home and got the tree set up, which took Clint all of 5 minutes to get it in the stand unlike the past few years that has taken way too much time to figure out how to get the tree in the house, and then attempting to put it in the stand without it falling over. And then came the lights. Somehow the box of lights that Clint found I think were meant for the trash last year….about 1/2 of the lights on one strand work, and they blink neurotically, and then other strand also blinks at its own rate/rhythm. The tree looks possessed. And makes you feel a bit whacko if you watch it for too long.

The boys and I hung the stockings (thanks to glitter glue and package of cheap red stockings at the store we were set) and put some LOVELY sliver/red/green garland on the railings around the house (Edric picked it out). The boys also stuck window clings on the windows that I found in the 50% off aisle at the store. Finally it was time to hang the ornaments. I started working on some paper chains while the boys hung the ornaments. I decided this year I was just going to let the tree be decorated by them and not be obsessive or what things spread out or want certain ornaments on certain places.

And so in the end about 78% of the ornaments are on two branches at the bottom, most of them touch the floor. The remaining 22% are mostly concentrated in one area about 2/3s of the way up the tree. And the rest of the tree is mostly empty….minus the neurotic lights and paper chain that we made. 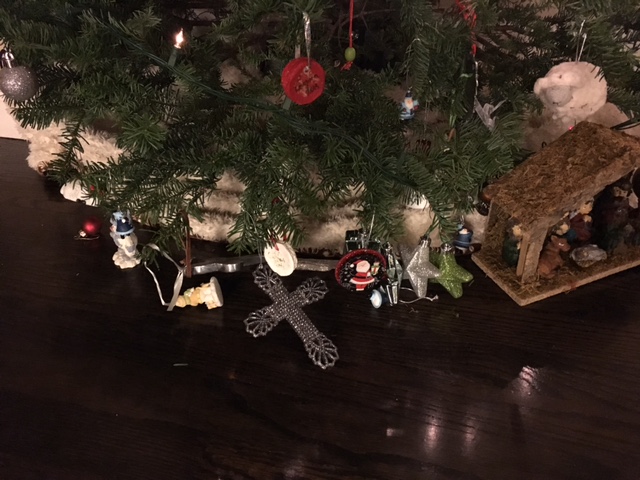 And you know what? It’s absolutely beautiful. I think I like it better than my other trees that I have insisted coordinate and match and look just right. Caedmon spends each evening re-arranging his 78% of ornaments on the bottom two branches so sometimes they are all spread out over 3 branches, and Leighton has moved his concentration a little to the right of where they were before. And I’ve said “boys, those cross ornaments are not swords, please put them back on the tree” at least a 1/2 dozen times already. But you know its a gorgeous tree and they love it and so do I.

Random side note, in the box of ornaments that we found, there was a sheep ornament that I think is suppose to be sleeping. When you push it, it is suppose to sound like it is snoring, but mostly it sounds like Darth Vader growling. And Edric loves it. He carries it around calling it his “farm animal”. So in the midst of cross ornament sword fighters and neurotically blinking lights we have the Darth Vader farm animal growling at us. Welcome to our house.