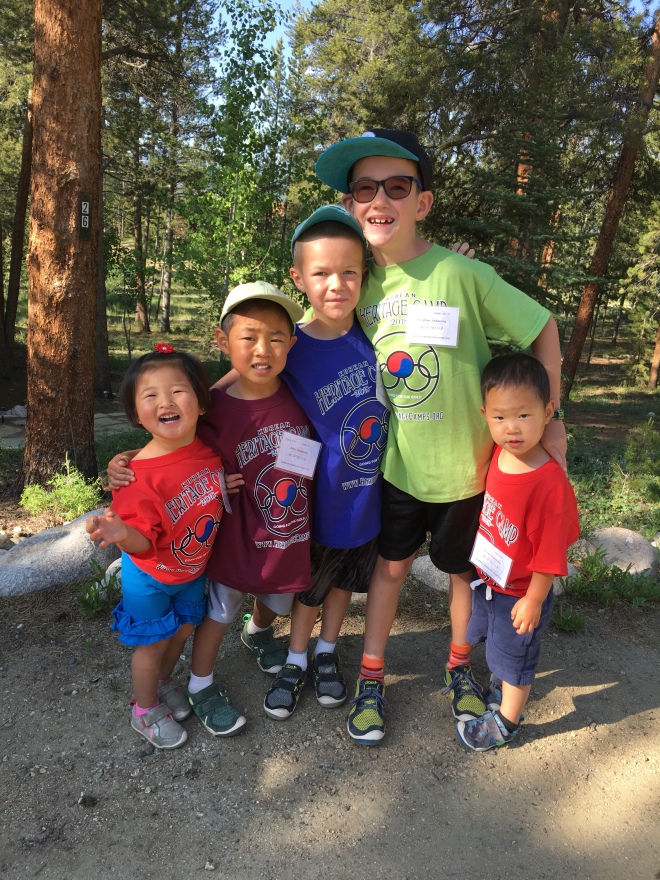 So I keep delaying writing this post because I want to include the photos that I took on my actual camera and not just the ones I took on my phone. Well….at this rate I might get the post written sometime in 2020, and so I decided to just use the few photos on my phone and call it good.

A couple of weeks ago we spent the weekend at Korea Heritage Camp. We went 2 years ago for the first time when Edric had been home about 7 or so months. We didn’t go last year because Paxton and Coppelia were still so newly home. It is put on by Heritage Camps for Families (heritagecamps.org). They actually have 9 different camps depending on where an adopted child is from including a domestic adoption camp. Camp starts on Thursday evening and goes until Sunday at noon. It is at Snow Mountain Ranch which is just gorgeous (although as a warning to flat landers-no matter where you need to go at camp it is uphill….even if you think you are at the top of a hill, where you need to go it will be uphill).

Thursday night starts with the Opening Ceremonies, and this year camp was Olympic themed which fit even more. All the kid campers march in in their age groups (age 3 through high school). Many of the kids where hanboks. Paxton actually wore Edric’s and Edric wore Paxton’s because they fit better that way.

Friday morning is when camp really gets going. Many people stay at Snow Mountain Ranch, we chose because we knew we were going to be staying a few extra days after camp to stay in a cabin about 10 minutes away. On Friday morning all the kids find their counselors, the majority of whom are Korean adoptees as well, and then they start getting to know each other. Each grade is color coded so drop off looks like a whole rainbow of shirts and kids. There are also parent sessions as well for parents to go to.

Each parent has a volunteer responsibility to help camp run smoothly. This year Clint and I volunteered on the photography team, so we were each assigned two grades to get photos of throughout the weekend. We chose the pre-K, Kindergarten, 1st and 4th grade classes….which so happened to be the 4 classes our kiddos were in. Reading their list of activities and who was going to be where was quite a task in and of itself. We figured out which parent sessions we wanted to go to and then which kid activities we wanted to photograph and then made our plans from there.

The majority of the photos I got are on my real camera because those are some of the ones I turned in to the camp for use in the slideshow and to be sent to parents. But I captured a few over the two days on my phone as well. The activities that the kids did ranged all over the board. They all visited the Olympic Village which had all sorts of cultural activities set up, paper folding, decorating Olympic medals, trying on Hanboks, a food station (which was very popular) a number of different Korean games, chop stick practice, and scroll making. I think it was one of the favorite things that my kids did. They also did Korean Hip Hop with a group from Korea that does K-pop, Korean drumming lessons, Taekwondo, cooking lessons, paper folding, Olympic style games, etc etc.

The kids were always full of smiles and stories at lunch time, which was always delicious, one day we had Korean beef and rice and the other day Korean chicken and rice both with dumplings, and with hot dogs and watermelon on the side if needed. We went to some great parent sessions as well, one on being a transracial family and the challenges that our kiddos will face in the future, an adult adoptee panel, Korean dessert lessons, Korean calligraphy, and insights into the status of North/South Korea and the US.

The first night there was a carnival that evening which had games, food, a silent auction and a raffle. The kids mostly spent their tickets on snow cones, but also won all sorts of random little prizes…none of which I’m sure we know the location of today but that night were highly regarded treasures and Clint’s pockets were bulging with the different prizes (because each had to have their own pocket). I bid on a number of things in the silent auction and raffle…ended up getting a movie pack with movie snacks, and a lego set. One of the items that was up for raffle was one of the coats that the United Korean team wore into the stadium at the Winter Olympics this year. One of Korea Camps former campers and counselors was a coach for the Korea ski team and he donated it…..it was WAY outside my budget but really cool to see. Also there was a shirt worn by one of the united Korean women’s hockey team that was signed by members of the team….also WAY out of my budget…but hey, I got 5 movies and some popcorn instead which was great.

We skipped out on the second evening of activities because after 2 VERY full days of camp everyone was TIRED. I think they had a concert with different performers and such. Sunday morning was the last bit of camp and it was family game time. They had a huge open area set up with all sorts of games from broom ball, to spear throwing, to hula hoops, to giant connect four, and my kids favorite- try and get a mini donut off the end of a fishing pole. Camp ends with Closing Ceremonies with a slide show and the song “Happy Adoption Day” (lyrics) and very few dry eyes.

We area already looking forward to next years camp. It is not often that my two older boys are the minority, and that my three youngers can look around and see people of all ages that look like them and as they grow older that they know share the same beginnings and maybe questions/fears/doubts/ and losses that they have also shared. It’s eye opening for all of us and gives us great tools to help strengthen our family.