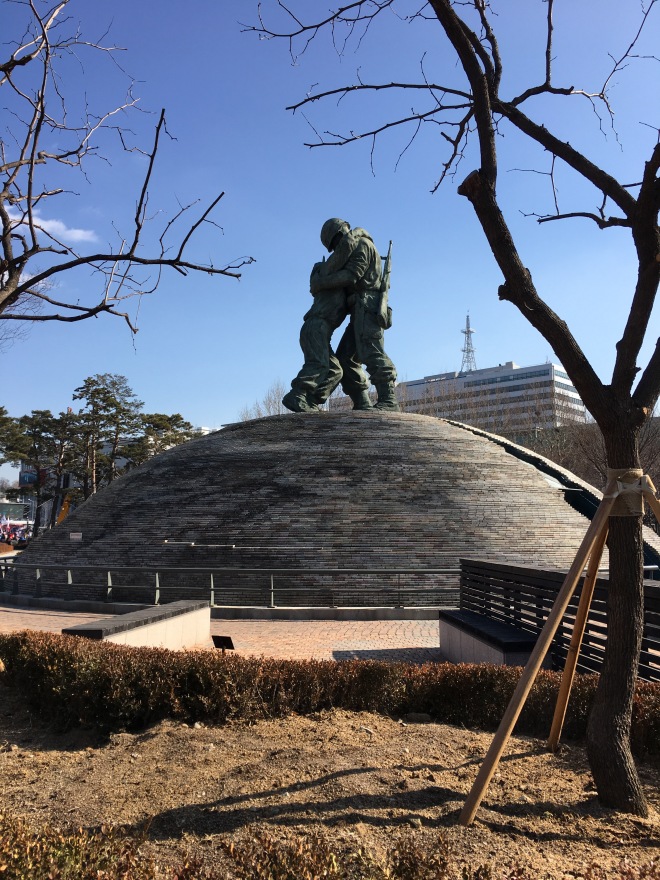 And today was the whole 5 minutes that we came. Actually it has been a really good week and I wouldn’t give up one minute of our meetings with our little ones, everything else has just been fluff and today was the formality of it all. And it in fact lasted about 5 minutes.
We were both nervous this AM when we got up and a little on edge. A good run on the treadmill helped that some and prayer time too. We put on our fancy court clothes and had breakfast and then headed to our agency. It was REALLY COLD today (I’m not sure it got above 10 degrees all day) and the wind made it worse, my eyes were watering because of the cold and by the time we made the short walk from the subway to the agency I had frozen tears on my cheeks. So much for what little make up I put on.

We rode in a van to the court building which was quite a ride because it is on the other side of the Han River, but it was nice to see the city as we drove along. We got to court early and then it was just a bunch of waiting. We got to know the other three families that we went to court with a little more which was fun and neat to hear how some of them decided on adoption and their journeys here. We were the last family from our agency to go.

I was worried the whole time about what to say about both adoptions and how to approach it all if it came up. The judge actually made it easy….his first question was “so with the adoption will you have 3 or 4 kids?” Ummmmm, so I answered “well actually with the two adoptions that we are currently doing we will have 5 children.” To which he said that he recalled that we were doing the two and that he hoped the second adoption went smoothly as well. His statement with that was my answer as to whether he was willing to combine the cases or not, and that took the pressure off of the rest of the time. He then asked both of us about what we did and how we plan on taking care of 5 kids. Clint answer “well, similar to how I take care of 3 kids now”. Which our translator told us afterwards that there is actually a Korean saying that says after 2 kids its really all the same, so I think he answered that question correctly.

After we were done with our court hearing the translator told us that today was the judges last day seeing adoption cases and that a new judge would be taking over. I was pretty conflicted about this and working hard on just trusting God’s timing. We rode in the vans back to the agency and along the way it was actually a clear enough day that we could see the mountain we climbed in the background.


When we got back to the agency I asked our social worker who had accompanied us to court how she thought this would all play out. She shared that she felt bad that the judge was changing and worried that that would delay our process with Coppelia. And at that point I just started crying. Everything from the week caught up to me and it all came out. The disappointment of trying and praying and praying and trusting more and more just all flooded out. So there we were in the back of the agency in 6 degree weather crying and hugging.

We made our way back to our hotel to change out of our fancy clothes and decide how to spend the afternoon. We had originally planned on exploring the palaces and markets and just enjoying a walk around because we had not done that yet this trip, but we decided we didn’t really want to freeze. We’ve done a lot in the cold, but today was by far the coldest and we just couldn’t get around spending hours in 6 degree weather. I checked our list of ideas and checked in with a good friend who suggested the War Memorial. It was free, inside, and interesting she told me, and so that was our plan.

We had a bit of a walk in the cold and I thought we were going to freeze before we even made it from the subway station that we were on…on the map it looked like a sort walk…turned out to be a bit longer than we had thought. But between my frozen eyelashes as we walked I started to notice a lot of police buses. We saw the buses last time we were here when there was a protest down at the main square about something and it didn’t click until we rounded the corner and saw people waving flags and someone yelling through a mega phone that we were walking towards a protest. I have read about the political unrest with the situation with the president in Korea and have seen the images of the protests growing to tens of thousands of people in Seoul so I was a bit nervous and luckily the War Memorial was right there so we quickly headed to that. From afar it was easy to see that this protest was not going to grow so big and there appeared to be as many police as protesters. (Not to discount the number as there were at least 20 buses full of police, but still not near the thousands.


Since we were already frozen and figured the afternoon was only going to get more cold we would do a quick tour of the outside before we headed in and got warm….I wasn’t sure I’d be willing to come back outside until I had to. There were all sorts of planes, tanks, helicopters, missiles and even a ship outside that we could walk around and explore. I thought that the boys would love running around and seeing all of that stuff.
We then headed inside. I have never been in a museum like the one we went in. (And I totally forgot to take many photos). I’m not the biggest fan of museums and probably even less of history, but this place made it all come alive. It told the history of the wars like a story. The second and third floors were all about the Korean War, we spend a little time in the early history of Korea, but then jumped into that War. There were interactive displays, signs and photos and models and all sorts of stuff that made it all real and memorable. Amazed at the number of young men that gave their lives both from Korea and the US but also 20 some other countries from all over the world. It was fascinating. I have to admit I was a bit skeptical but was so glad that we went. It was pretty heavy stuff too, so lots to think about and process.
We then headed back for dinner and found a yummy noodle place. We didn’t know the size of things and should have just ordered one order of noodles and one order of soup, because the bowl of soup probably could have fed 4 people. But we got 2 noodles and 1 soup. And so we ate a lot. A LOT. But it was really good. We then headed back to our hotel to sort through and get everything packed. We thought we were going to have lots of extra room going home because we didn’t have any gifts….but we are taking 70 calendars home from our Korean agency to our US agency so that filled up all our extra space.

And then I had Clint cut my hair. Yep you read that right. It’s still long but he took a good 3-4 inches off. It just needed it. I’m probably suppose to go to someone professional but he does a good job and he’s free.

And so we are packed and ready to head home tomorrow. As I sat down to write this out I did do a quick check of the court website and found that Coppelia’s case has been assigned a court date! And so despite my disappointment earlier today, God is faithful and has a plan and hopefully we will be able to time Paxton’s custody with Coppelia’s court hearing. 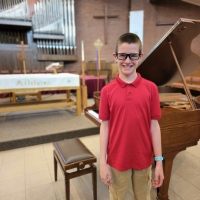 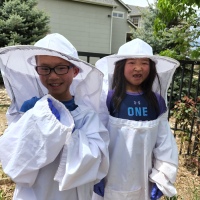 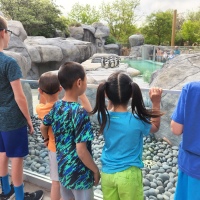