It was such a good day! And it’s currently 7:30PM and we are both fighting to stay awake…but it was an amazing day.
We got into Seoul pretty late last night and by the time we got to our hotel and got unpacked enough to be functional for the week it was pushing 11:30, neither of us sleep real well on the plane….I should say that Clint was able to sneak in a couple of short little naps but I struggled to get any sleep, so we were beat when we finally made it in last night.
We hit the ground running this morning. Both figuratively and literally as we were up and going at 6 and found the workout room and I ran a few miles on the treadmill and Clint ran and lifted. It took me a few minutes on the treadmill to realize that it was all in metrics…I kept wondering why a spread of 7.2 seemed pretty slow…turns out it was 7.2 kilometers/hour not miles/hour. I eventually got it to the right speed. We had breakfast at our hotel and then we had a lot of time to still kill before we left for our first meeting with Paxton. We had a good prayer time and finally just gave up and left early.


We became pros at the subway last time we were here and so it was an easy trip to Eastern. We were suppose to be there at 9:30 to do online visa paperwork and we ended up walking in at 9:10. We were able to do our online application and verify that Paxton was not a terrorist or had participated in torture or polygamy (actual questions from the Department of Homeland Security about our 20 month old).

We met up with a couple other families that we had previously only known online while we waited for our visit time of 10:00.

Paxton was already in a playroom when we met with the social worker and she quickly took us up stairs. When we walked in he bowed to both of us to say hello and it was probably one of the cutest little bows and things I have ever seen. We got right to playing. He had some big plastic rings out and we jumped right in and started playing with him. He was appropriately cautious of us, but quickly warmed up. I also wasted no time in touching him and after he had warmed up some I pulled him into my lap. He was a little more hesitant of Clint but enjoyed playing with him as well. Bubbles were a huge hit….playdoh not so much, he didn’t really care for it. Paxton let me pick him up and we played airplane and passed him between Clint and myself and during that we got to hear his sweet little giggle. We played with stickers and crayons as well. There was a game in the room that we were in that had different cards all in a tin and he carefully took a card out and would hand it to one of us and then pull a second card out and keep going. It was a super sweet time. His little legs are still very much toddler and he waddles a bit as he walks and sometimes still acts like he might just tip over. Towards the end he showed us his dance moves….which was more or less fancy jumping/kicking his legs around. The time went way too quickly and before I was ready we were saying goodbye and he was bowing for us all over again. We get to have another meeting with him on Wednesday and I’m already looking forward to it.

After our meeting I took photos for another families first meeting while Clint hung out in the Eastern cafe and read. We had already planned on heading to a noodle place for lunch that we ate at last time and a couple other families joined us. We had a good meal and it was good to meet people in person that I have only met online.

We spent the afternoon traveling around on the subway. We know the names of the hospitals that both kiddos were born at and so we decided to travel to those hospitals and get photos of them. We did that for Edric and I think the kids may want it someday. Paxton was born in a town south of Seoul but luckily still on the subway map. It was quite the trip but we made it and got a photo of the hospital for him.


There was a park across the street from Paxton’s hospital and so we decided to explore it. There were some random statues in the part as well, the one I posed with had different clocks all over it. We found a statue with a giant dung beetle and I couldn’t resist but I told Clint that was his statue photo.
We then headed to Coppelia’s hospital to get a photo of it as well. It was much closer to Seoul. With that we were kind of spent for the day. We headed back to our hotel room to drop off our fancy clothes that we had switched out for comfy clothes after our meeting and Clint was still carrying in his backpack.
For dinner we decided we were only a subway station away from Myeondong and Lotte Mart. I had read that Lotte Mart had a food court and market in the basement and so we decided to head there because it was warm. There were a ton of different options to choose from. Clint kept looking at dessert but ultimately I convinced him to leave the dessert. We found a spot that had different dumplings and such and stocked up on our dinner there. 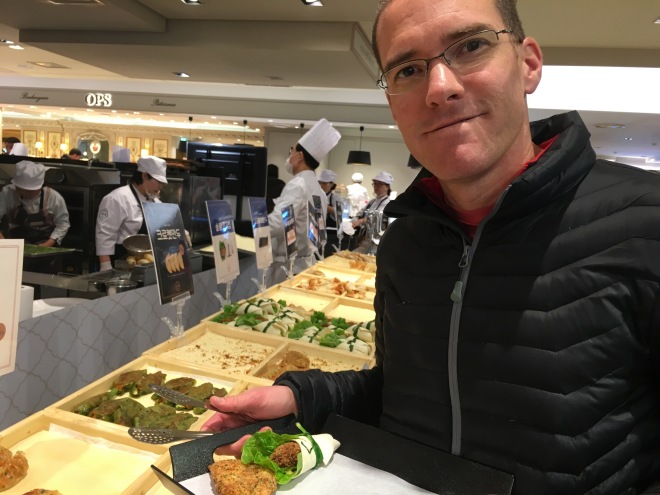 It was a really good day. I don’t think we could ask for a better meeting with Paxton and considering how late we got in and how much we did today I think the whole day was a success!