I still thinking it is amazing that if you had told me 4 years ago that we would be a homeschool family I would have totally laughed and not believed you at all. And yet, here we are starting our 3rd year and loving it. And most of my fears (about us being weird and unsocialized and such) are not really true…unless you count the random clothes that Caedmon has been wearing lately (ie rainbow suspenders, frog costume hat, and snow boots).

We started our third year on Monday. It’s a bit early, but with our unknown travel dates for our adoptions this year, I know we’ll take weeks off then, so we decided to start a little earlier than last year so we can still hopefully finish up in early May even with our traveling and growing family. We moved the classroom downstairs last year and its been a good change. However this year Clint and I decided to decorate it just a little and surprised the boys with the outcome. They all think they are part super hero, and so this room totally fit. 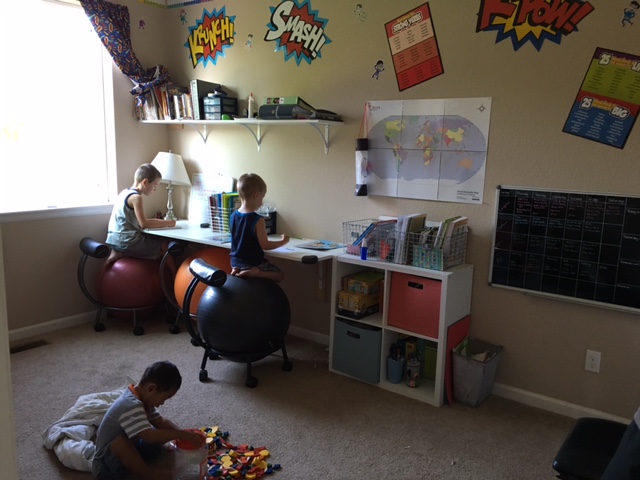 For Leighton this will be his 3rd year using Sonlight, we’ve really enjoyed their reading and history and language arts program. He loves books and stories and so it has been a really good fit. We add some extra phonics and this year are adding in some Logic puzzles as well. He’s a grade above for language arts, but that’s the nice thing with Sonlight we can do both. Our homeschool enrichment program actually has the Book Shark curriculum, that is really just Sonlight minus the Bible parts, available for checking out, which we have done and just added the Bible parts back in. It has saved a ton of money and been great to use.

This will also be his 3rd year of Singapore Math. Even though he is technically 2nd grade, we are starting 3rd grade math. It depends on the day whether or not he likes Math, but when he puts his mind to it he does really well. We added Life of Fred towards the end of last year to add variety and he has really enjoyed that.

On Tuesdays he will go to the area homeschool enrichment program through the local school district. It’s an all day program that offers all sorts of classes and opportunities. This year he gets to switch classes every hour, and he is really excited about the classes he signed up for. He is going to be taking Science, Music Explorers, Computer Skills, Medieval History, Passport to the World (each week they pretend to travel to a new country), and Intro to Robotics. We had orientation the other day and he was virtually inseparable from his friend that he made last year unless the two were in different classes. I’ve asked him if he wishes he could go to school like that every day, and he’s tells me, “no I like being home but its nice once a week”. 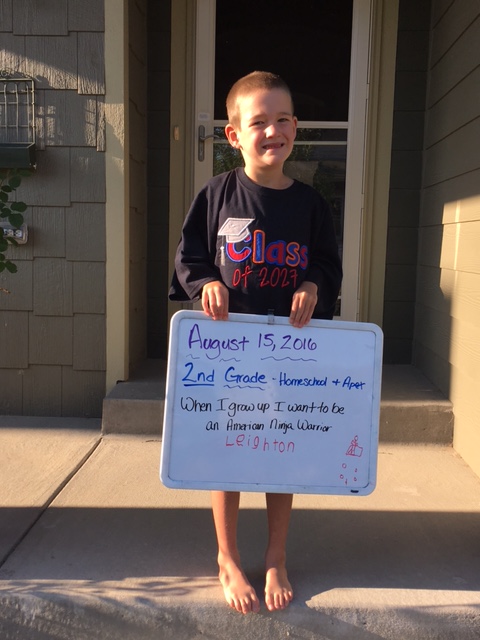 For science we are using Apologia and this year Leighton decided that he wanted to do Chemistry and Physics. Our first lesson the other day talked about atoms, and he is soaking it all up.

Then throw in some piano and gymnastics and that just about rounds out Leighton’s schooling.

Caedmon and Edric will start preschool in a couple of weeks. For the first time they won’t be going to the same preschool that Leighton went to for two years and that Caedmon went to last year. A number of things played into that decision but ultimately it was trying to make sure Edric’s language development could be supported the best way. As it turns out there is a preschool through CU’s speech language department that had room for both boys. They have 12 students, 4 with needs and 8 “typical developers”, so both boys qualified. It is staffed with an early childhood teacher, speech language teacher, occupational therapist and 6-8 grad students. Each grad student is assigned a family and they work closely with that family to support and meet the students where they are at. I think it will be really good for both of them.

We did start Caedmon as well on kindergarten language arts this year as well because he’s been more than ready to start reading and is so exicited to. I’m doing handwriting with him as well. 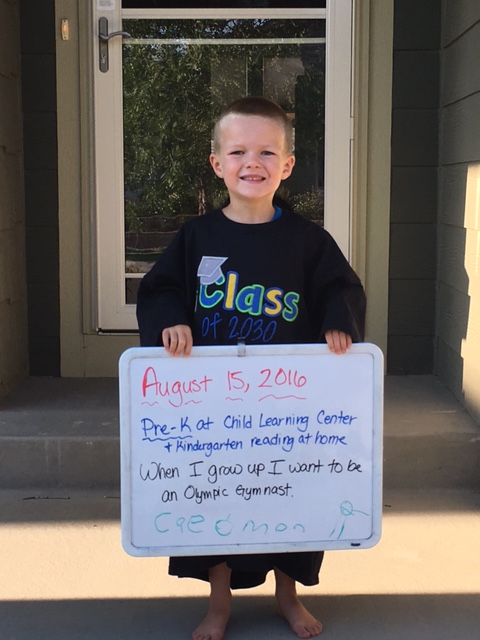 And so we embark on year number 3. Excited to see what all we learn and how we grow as a family!