On to 16 now….looking forward to counting months that he is home and not months that we are sending packages. While it should seem that each month brings us closer, lately it is just a reminder that another month has passed and he is still not home.

We got our video of when our agency was with him a week or so ago. It was fun to see him. He is very shy and timid around those that he does not know and cried for a good portion of it (and for quite awhile before they started filming too). We did learn that he loves (really really loves) blueberries. I found this out after I had already packaged up and sent off package number 16, so we will have to wait for #17 to send the dried blueberries I ordered.

But here is what I was able to get into package 16. I came up with 17 different questions for Foster Mom to answer, everything from “describe the house that you live in” to “what are some of your favorite memories with him”. I then had a friend who is super crafty and has her own business making cool things make a journal with the questions printed in it both in English and Korean (https://www.etsy.com/shop/TheMombot). I wrote a note to Foster Mom and asked her to fill it out and include photos and such and then we will get it when we take custody and Edric will have some written memories and events about the first few years of his life.

I also found a cute little summer time outfit with a car on it. He is still on the small side, I hope that it’s not too big on him. That being said, in the last group of photos we got, he was wearing the cameo overalls that we sent (24 month size) and a 12 month red striped t-shirt that we sent a year ago. Cameo and red stripes are not the best combo…just saying. He still looked super cute though.

When we celebrated Edric’s birthday we went out to the Wild Animal Sanctuary in Keensburg, Colorado for the day and saw the animals that have been rescued and are being rehabilitated (if I ever get my act together I will actually write a post about it…I’m only a few months behind). When we were leaving we went through the gift store and the boys picked out some finger puppets for him. This alligator is one of them. I also found these balls that light up and squeak. 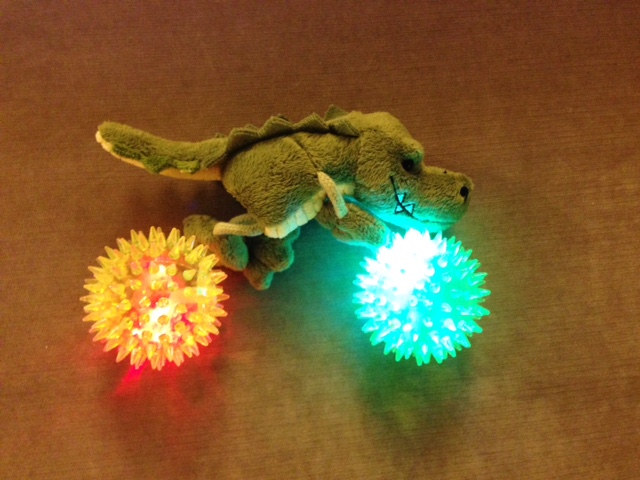 I included a water bottle and some animal stickers and two little books as well. And some more food pouches and baby shampoo.

For Foster Mom I found some dark chocolate to include.

And that’s package number 16! Hoping these are numbered and we don’t have that many more to go