Mommy and Me Gymnastics

On Thursday mornings you can find me and Caedmon in the van headed to “nastics” as he calls it. On the way I often ask him “Caedmon, what are we going to do at gymnastics today?” To which he replies in his 2 year old voice “ummm, go down slide, do butterfly and jump in blocks”.

If you were to continue to follow me, a short time later you would find me along with 5-6 other moms all doing “Head, Shoulders, Knees and Toes” while half a dozen toddlers jumped and ran circles all around us. By the way, us mommies have “Head, Shoulders, Knees and Toes” down pat. I think the idea is for the toddlers to do the song and actions, but I’m sure in their minds they are thinking “I have no idea what these mommies are doing, but they look pretty funny”.

As the morning continues we move to floor exercises, balance beam, bars, and the toddler favorite (and mommy nightmare) of trampoline/pit. More on that nightmare in a bit. Usually during floor time the mommies try to actually have conversations with each other. Unfortunately the conversations are interrupted with various phrases that go something like this “No, we go down the slide not up the slide”, “let’s do a forward roll down the mat and not run down it”, “jump, jump, jump”, “here watch mommy do a bear crawl” (which is almost as entertaining as “Head and Shoulders”) and so forth. On a good day we might actually get two complete sentences in before such various phrases is uttered.

From there we go to balance beam. The instructor often lays either beanie babies or bean bags out along the beam for the kids to practice stepping over. It never works. Usually one toddler declares one (or often multiple) of them as hers/his. Another walks along and purposely kicks the remaining off the beam. There is always one who goes along besides and tries to put all of them back on the beam while other kids are trying to step over or on her. Ultimately that it all ends in a pushing/pulling fight with the one who has declared the rooster or octopus beanie baby as hers. Caedmon usually walks like a pro down the beam, but at the junction where he is to turn to corner he jumps off (mind you the beam is 3 inches off the ground) and runs full speed down the vault runway to the foam pit. I usually get my exercise during this point, if I’m fast enough I can catch him just before he lunges himself into the pit. While at the beam I usually get in 4-5 full out sprints in this manner. One may think that a little 3 foot being cannot move fast, but I am pretty sure if you put a toddler and a cheetah up against each other (assuming the cheetah didn’t decide to eat the toddler for a mid morning snack) the toddler would win hands down, especially if there are obstacles or people that a mommy would have to jump over.

Bars come next. And it’s clearly a good idea to have our toddlers walk themselves across a bar that is 3-4 feet off the ground. There are plenty of mats underneath, but it is another great time to watch mommies contort their bodies in odd shapes as they try to support and prevent any falls.

And then comes trampoline and pit. Actually the rule is that the kids have to practice their handstands before they can get on the trampoline. I think most hold their handstands (with wall support mind you, they are 2 after all) for all of about a millisecond before attempting to climb on the trampoline. The toddlers are suppose to take turns and jump in one direction down the trampoline. Watching the mommies try to wrestle the toddlers all while saying “it’s not our turn yet, we have to wait our turn” is again entertaining. About this point there are usually 2-3 that throw tantrums with the kicking and screaming and the rest of us manage to somehow wrestle our monkey into line and hold on to them until it is their turn. Despite our best efforts there somehow usually ends up two toddlers headed at full running speeds towards each other while two mommies are making flying leaps up and over other people towards the tramp to catch the two before a major collision happens. It is impressive. One never knows if it will be her week to make that sort of performance, it usually happens the moment one engages in a conversation with someone and for a split second turns her attention just slightly away from the toddler.

And then there’s the pit. This is Caedmon’s favorite. And usually I’ve already fished him out of the pit 2 or 3 times by the time we officially make it to the pit (see “balance beam” above). The pit is 7 feet deep with large trampolines at the bottom of the pit and then filled to ground level with foam blocks. Caedmon will find the tallest structure around (usually there’s a 3 foot block nearby) that he climbs up and then flings himself into the pit. I remind him “we jump feet first” to which he looks at me, nods, and the promptly flies through the air like superman ending in a belly flop. When he turns himself over he looks at me and says “I jump feet first”, to which I reply “uh not really buddy, that was belly first”. He then answers with “I stuck, help!” to which I often end up having to jump in and fish him out. And the process repeats itself about 27 more times.

At the end we all sing our good by song and the kids line up to get stamps. Looking around the mommys look pretty beat. After all we have completed in a major gymnastics event. Between the coordination of “Head and Shoulders”, the precision of our bear walks, the balancing act between toddlers sharing beanie babies, the full out sprints down the vault runway, the graceful bending and twisting associated with bars, the leaps and flips on the tramp, and the pure strength and endurance of the pit, in a short 45 minutes the mommies have once again proven their athletic prowess.

In all honesty it is one of my favorite hours each week. I get to spend some focused time with Caedmon, get to see him work and improve on skills (not to mention the workout and skills I gain in process), and hear his giggle as he runs down the vault ramp, and see his smile. Pretty soon he’ll be too big for the “mommy and me” class, and I’ll be resigned to sit on the side. I’m going to soak up each moment I have and nothing makes me smile more then when we climb in the van to head home and I hear him say “I wike nastics mommy”.

And while I wish I had a photo or two to accompany this post, the ones I have attempted show nothing more than a blur or streak moving at high speeds over some object. 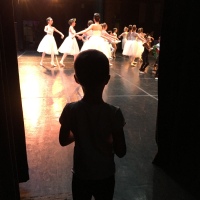 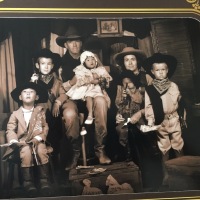